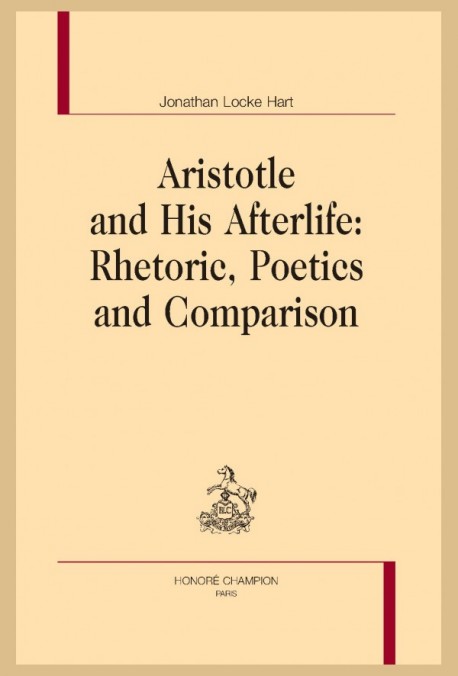 ARISTOTLE AND HIS AFTERLIFE: RHETORIC, POETICS AND COMPARISON

Aristotle and His Afterlife: Rhetoric, Poetics and Comparison focuses on these elements expressed in the title and examines particular comparative contexts in Aristotle, such as politics and how natural slavery relates to ethics and the European exploration and settlement of the New World and how that is connected with hybridity in the Americas. More specifically, the volume analyzes Book Three of Rhetoric, which contains a discussion of style, something discussed earlier, for instance, in the manuscript notebooks of Samuel Taylor Coleridge, William Gladstone and Charles Stearns Wheeler in England and New England from about 1819 to 1840. After examining style in Rhetoric and these comparative discussions on natural slavery (politics), hybridity (ethics) and Aristotle and Shakespeare in terms of history and literature as performance, the book concentrates in later chapters on Aristotle’s reception (his afterlife) in texts. There are, throughout, comparative elements of antiquity and modernity and of English and other languages, literatures and other cultural contexts and of literature and other fields, of theory and practice. Aristotle uses a comparative method in Poetics and in Rhetoric when he discusses poetry and the uses of language in different fields and genres. His interest in comparison occurs across the disciplines.

Jonathan Locke Hart was Chair Professor, Creative Writing, Comparative Literature, Theory, and Literature in English and Director, Centre for Creative Writing and Literary Translation and Culture at Shanghai Jiao Tong University (2015-2019), is affiliated with University of Toronto and Harvard, and is Life Member, Clare Hall, University of Cambridge. A Fellow of the Royal Society of Canada, he is a poet, literary scholar and historian who studied at Toronto and Cambridge and has held visiting appointments at Harvard, Cambridge, Princeton, Toronto, the Sorbonne Nouvelle (Paris III), Peking and elsewhere. He is the author of many articles and over twenty books, including The Poetics of Otherness (2015), The Burning Lake (2016) and Making and Seeing Modern Texts (2019).