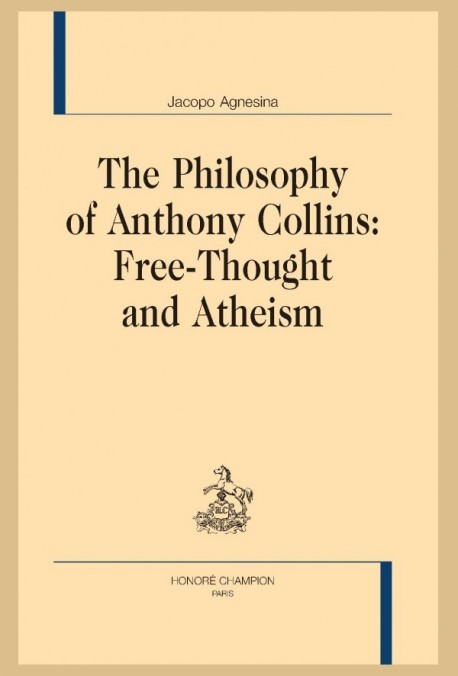 THE PHILOSOPHY OF ANTHONY COLLINS : FREE-THOUGHT AND ATHEISM

Anthony Collins (1676-1729) is most often remembered for his Discourse of Free-Thinking (1713) but his philosophical positions are equally audacious and largely innovative: the denial of God’s intelligence and design, the rejection of the existence of an immaterial soul, the affirmation of a deterministic conception of nature, the idea of man as a machine close to the animal, with equally hedonistic impulses. However, although these tenets form the core of his philosophical works, Collins was more attached to the ideal of intellectual liberty than to his own convictions. Which is why, throughout his life, from his exchanges with Locke to the debates that were carried out in his private library, he continually pursued open confrontation, rejecting with cutting irony any limitation on the freedom of thought.

Jacopo Agnesina (1983), Ph.D. at the University of Eastern Piedmont (Italy), has devoted his research to the main themes of Radical Enlightenment. He recently published the first Italian translation (with English text) of Anthony Collins’ A Philosophical Inquiry concerning Human Liberty (Bompiani, Milano, 2015).